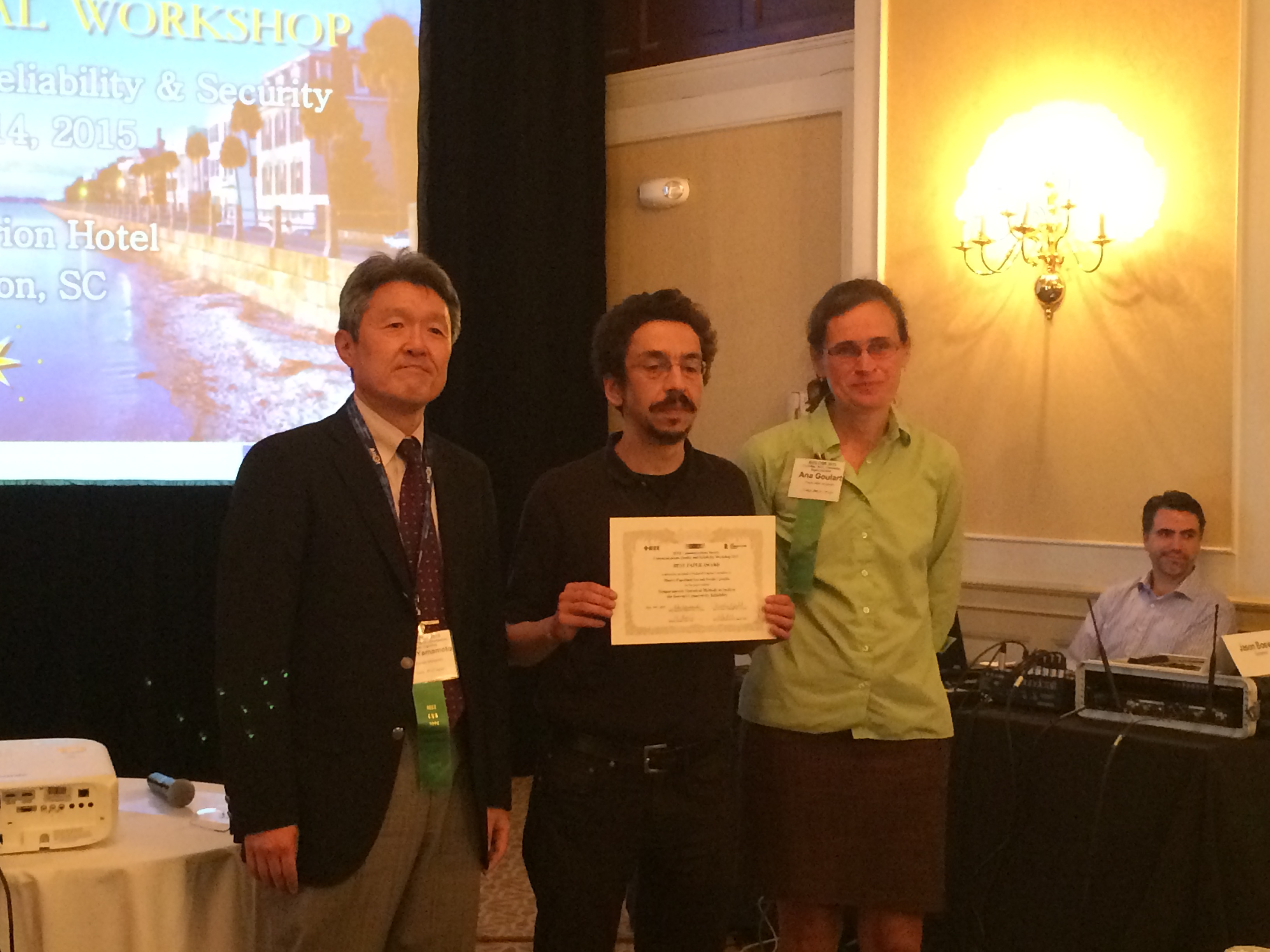 Abstract – LTE is an all IP network.  The scheduling in its downlink channels is a key problem.  Although many algorithms have been designed and analyzed, the QoS for the users in poor channel conditions are not enough to be ensured sometimes.  We design a method to enhance the capacity of the system, which is a modifying strategy available for most existing algorithms.  Our intuition is to allocate more resources to the users in poorer channel conditions without declining the QoS of the users in better channel.  Simulations show that our strategy can satisfy the QoS for more users.

Abstract – Power-saving is one of the important issues in wireless sensor networks and many studies on power-saving in wireless sensor networks have been done.  However, most of these studies have focused on saving power in gathering the information.  In this paper, we tackle the issue of the energy-efﬁcient information dissemination in wireless sensor networks.  We propose method of disseminating information while optimizing electric power consumption in wireless sensor networks.  Our new dissemination method employs ﬂooding and uses the receiver signal strength to determine the broadcast timing. In our method, the node farthest from the sending node will rebroadcast the message ﬁrst and a broadcast is canceled when a node scheduled to broadcast receives a duplicate of the scheduled message from other nodes.  We evaluate our proposed method by simulation.  As a result, it is found that the electric power consumption of the proposal method in the entire network is one-third that of the ﬂooding method at the maximum.  Furthermore, we show that the farther the transmitting distance of the wireless radio wave becomes, the more efﬁciently our method can disseminate information to the network.

Abstract – Traditional encryption techniques require packet overhead, produce processing time delay, and suffer from severe quality of service deterioration due to fades and interference in wireless channels.  These issues reduce the effective transmission data rate (throughput) considerably in wireless communications, where data rate with limited bandwidth is the main constraint.  In this paper, performance evaluation analyses are conducted for an integrated signaling-encryption mechanism that is secure and enables improved throughput and probability of bit-error in wireless channels.  This mechanism eliminates the drawbacks stated herein by encrypting only a small portion of an entire transmitted frame, while the rest is not subject to traditional encryption but goes through a signaling process (designed transformation) with the plaintext of the portion selected for encryption.  We also propose to incorporate error correction coding solely on the small encrypted portion of the data to drastically improve the overall bit-error rate performance while not noticeably increasing the required bit-rate.  We focus on validating the signaling-encryption mechanism utilizing Hamming and convolutional error correction coding by conducting an end-to-end system-level simulation-based study. T he average probability of bit-error and throughput of the encryption mechanism are evaluated over standard Gaussian and Rayleigh fading-type channels and compared to the ones of the conventional advanced encryption standard (AES).

Abstract – Recent widespread use of smartphones and rich multimedia contents has brought a considerable increase in mobile trafﬁc.  Therefore, the characteristics of smartphone trafﬁc need to be considered when designing mobile core networks.  Smartphone trafﬁc is categorized by whether it is generated from user interaction (foreground (FG) trafﬁc) or not (background (BG) trafﬁc), and such trafﬁc types can be managed differently to efﬁciently maintain the communication quality in the case of network congestion.  However, it is difﬁcult to distinguish such trafﬁc types and their characteristics solely by IP addresses/port numbers.  In addition, the increase in HTTPS trafﬁc makes application-level packet inspection difﬁcult.  In this paper, we propose a trafﬁc classiﬁcation method on a mobile core network.  The proposed method captures packets on the mobile core network, constructs TCP ﬂows, and labels each ﬂow by considering the regularity of BG trafﬁc and the randomness of FG trafﬁc using a Support Vector Machine (SVM) classiﬁer with selected feature indexes obtained from the TCP/IP layer.  Also, we attempt to restrict the indexes that can be obtained in the observation of the initial part of each TCP ﬂow in order to reduce the calculation cost.  The proposed method is evaluated in terms of the classiﬁcation accuracy using experimental data through the Wi-Fi connections of smartphones.  The full-index classiﬁer using 40 indexes classiﬁes FG and BG trafﬁc with 97.2% accuracy and the shortcut-index classiﬁer using restricted 36 indexes also indicates 94.4% accuracy.

Abstract – To understand security vulnerabilities of communication protocols used in power systems, a real-time framework can be developed to conduct vulnerability studies.  The framework should implement protection mechanisms against vulnerabilities and study their effectiveness.  In this paper, a real-time cyber-physical framework or test bed is presented.    It integrates a real-time power system simulator and a communication system simulator to study the cyber and physical system vulnerabilities in smart power grids.  The power system simulation is implemented using the Real-Time Digital Simulator (RTDS®) power grid simulator, with LabVIEW and PXI modules that simulate the supervisory control and data acquisition (SCADA) system and intelligent electronic devices (IEDs).  The communication system simulation is implemented using Opnet’s System-in-the-Loop (SITL) simulator and open source Linux tools and servers.  Results of two cyber-attacks on the Modbus/TCP protocol are discussed and improvements to the test bed for protocol attack detection and mitigation is proposed.

Abstract – In content oriented application, such as P2P, a user does not care about where content is obtained and a content ﬁle can be downloaded from anywhere it is obtained.  In some P2P systems, e.g. BitTorrent, a content ﬁle is divided into small parts, chunks, and each chunk is downloaded from anywhere.  In this many-to-one communication style, one TCP session is set up for each pair of a sender and a receiver.  If these sessions go through the same bottleneck link, many-to-one communication might obtain unfairly large throughput.  In this paper, we propose a new receiver-driven congestion control for this many-to-one communications.  Our proposed congestion control detects bottleneck-sharing ﬂows and clusters them.  Window coupling technique is applied for these clustered ﬂows, which enables these ﬂows to obtain fair aggregated throughput.   Our simulation results show that our proposed receiver-driven congestion control fairly shares a bottleneck link with regular TCP.

Abstract – Hybrid automatic repeat request (HARQ) can make efficient and reliable transmission possible for radio communications.  However, in the HARQ scheme, packet control information (PCI), such as HARQ block identifiers (HARQ block ids) in selective repeat ARQ (SR-ARQ), are required and the reduction of PCI overhead is an issue.  In particular, type-II HARQ handles a large amount of PCI because it includes the HARQ block ids and sub-block ids.  The sub-block id identifies the set of parity bits in the HARQ block of the corresponding sub-block, and is used to combine the sub-blocks.  This report proposes a method of PCI reduction suitable for type-II HARQ with SR-ARQ.  The method can inform the HARQ block id and sub-block id of each HARQ block by sending only the information on how many HARQ blocks are contained in each 1st, 2nd, 3rd, and 4th transmission group.  The estimated size of reduced PCI and simulation results of our TDD communication system confirms that the proposed method greatly reduces PCI and improves data throughput compared to a conventional method.